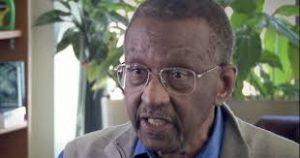 Williams died on Wednesday, a day after teaching his last class at GMU, where he was the John M. Olin Distinguished Professor of Economics since 1980. From 1995 to 2001, he also served as the department chair.

Known on the national stage for his nationally-syndicated column that appeared in newspapers and on websites, Williams was the author of more than 10 books and was a regular fixture on radio and television shows where he championed conservative ideologies and rallied for a free market system. Given the dearth of Black economists, Williams was particularly noticed because his research was devoted to studying the effects of markets on minority groups as well as government policies.

“He was for 40 years one of GMU’s greatest assets — and champions,” GMU economics department past chair Dr. Donald J. Boudreaux and current chairman Dr. Daniel Houser wrote in a tribute.

A native of Philadelphia, Williams graduated from California State University in Los Angeles and earned masters and doctorate degrees in economics from the University of California, Los Angeles.