Dr. Juliana Mosley considers herself an “educator through and through.”

Her career began in the Houston Independent School District, where she worked as a high school teacher, while juggling teaching night classes at a local community college. 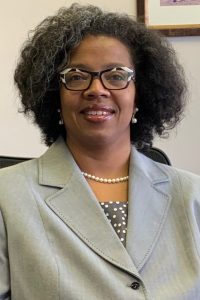 Intending on eventually becoming a principal, Mosley went back to school to earn a doctorate at Miami University.

There, while working for the dean of the graduate school as well as a teaching assistant, she became interested in a career in higher education.

Mosley’s first higher ed position was serving as an executive assistant to the president of Kentucky State University. However, after the president stepped down a year later, she also left.

“I was a one-year freshly minted Ph.D. and I was basically at the top of the food chain when you think about it from a structural standpoint,” says Mosley, who is the special assistant to the president for diversity, equity and inclusion (DEI) at Salus University. “I was on the cabinet. Who was going to hire me? I didn’t have work experience in higher education outside of really that one year and some adjunct teaching at a community college.”

Her focus shifted to one of her passions: DEI efforts. Mosley became the director of multicultural affairs at John Carroll University.

From there, she worked in several administrative student affairs and DEI positions at institutions such as Philander Smith College, Marygrove College, Edward Waters College, Lincoln University and Chestnut Hill College.

Mosley has also received a number of accolades including Lincoln University’s Student Leadership and Success Award for Administrators in 2015 and Ohio Magazine’s Excellence in Education Award in 2003. She was also named to the Kaleidoscope Magazine 2004 Forty/Forty Club.

As her career progressed, she has followed former students on social media and watched them become professionals and experts in their field.

“I am here for the students,” she says. “I don’t care how young, how old. I don’t care their walk of life. I am here for them. What I teach is about passion, but teaching is my calling. When I look back at my students, who they are, there’s nothing else that would make me prouder.”

Over the years, Mosley also continued with her consulting work. She has presented at more than 40 conferences and institutions and she has engaged in DEI training as well.

In August 2019, Mosley was asked to be the DEI presenter for Salus University’s Orientation Week. She was invited to return a year later to be the speaker for the virtual event focused on “Making the Unconscious Conscious…Through Cultural Humility” and learned about the new open position of the special assistant to the president for DEI.

After applying, she received the job.

In her new role, which began Nov. 1, Mosley aims to develop a strategic plan and further build on the current work being done by Salus University’s DEI committee.

“Dr. J, as she likes to be called, brings a wealth of experience, knowledge and passion that will augment our commitment to building an inclusive culture characterized by civility and respect,” says Dr. Michael Mittelman, president of Salus University, in a statement. “By increasing the number of students, faculty and staff from underrepresented groups, we will create an environment of belonging.”

Mosley was drawn to Salus University’s health care focus amid the ongoing COVID-19 pandemic. Indeed, Mosley wanted to be part of the conversation and address the existing racial and socioeconomic health disparities being exacerbated by the pandemic.

“I felt like I really was in a position to help to change society, even just through our institution,” she says. “That if we could make our future doctors and health care providers that much more culturally competent, aware and humble, then it would be all worth the while for the work that I do.”

Despite her transition to the postsecondary education sector, Mosley has continued her work with high school students at local Pennsylvania schools. She has even presented diversity and equity ideas before a classroom of fifth graders.

“Trying to help even really young youth understand why it’s important to be unified and to treat people kindly and to be fair and respectful,” she says. “I have to take all these big DEI items and make them more relatable. We talk about respect and we talk about unity and community. Because you do not necessarily go in there and talk about microaggression and bias.”