After serving as president of Alabama A&M University (AAMU) for over 11 years, Dr. Andrew Hugine, Jr. announced last week that he will be retiring.

His retirement spans a career that started in the K-12 sector, where he was hired to teach mathematics at Beaufort High School in South Carolina.

After a year in the classroom, Hugine was asked by his alma mater, South Carolina State University, to become involved in a college student support program. There, he focused on providing students with resources and materials to be successful in college.

“I loved being again on the campus,” said Hugine. “I loved interacting with the students and helping them to achieve their goals and objectives. That sparked in me the desire to pursue higher education as my career.”

With the career goal of becoming a provost and vice president of academic affairs, Hugine was advised to pursue advanced studies. He earned a master’s in mathematics from South Carolina State University and went on to pursue a doctorate in higher education and institutional research at Michigan State University (MSU).

While at MSU, Hugine worked in the university’s office of institutional research and learned how “information and data can be used to make informed decisions in higher education.”

After graduating, he took on an administrative role as director of Institutional Self-Study back at his alma mater.

During his tenure at SC State, he also served as assistant vice president for academic affairs and returned to his “first love” of teaching, working through the ranks to become a full professor of mathematics.

Hugine was eventually approached and encouraged to become a college president, a post that he held for five years at SC State before he was tapped in 2019 to lead Alabama A&M University. He said that his previous training in higher education prepared him for the Alabama presidency. 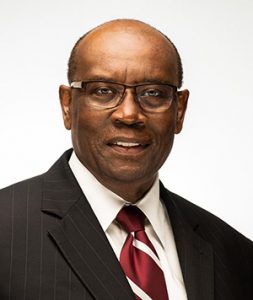 During his tenure, AAMU received accreditation from the Southern Association of Colleges and Schools Commission on Colleges. Additionally, as part of a $96 million financial agreement with the United States Department of Education, debt was eliminated and a new residence hall was built.

Fall enrollment has increased by 25.8% since 2012 and new academic degree programs have been established on campus, according to AAMU officials.

“When I arrived, my ultimate goal always was to be sure that, upon my departure, the university would be better than the condition in which we found her,” said Hugine, who is 71. “And obviously at this point, that is true. Of all the metrics that one might consider, the university is significantly better poised for even greater things in the future than when I arrived here.”

He credits his cabinet and board members for the university’s success over the years and his wife, Abbiegail, a retired educator who was a vocal AAMU cheerleader.

Through her involvement in the Bulldog Pride Committee, which consists of student, faculty and alumni volunteers, a number of initiatives and programs were created on campus. This includes the establishment of the Be the Match Campaign, the First Lady’s Endowed Scholarship Program and the Normalite Walkway Pavers Project.

Legacy Lake, a tribute to honor AAMU first ladies, and the “Quad,” a hub location of student activities, were also established.

“I have been fortunate to have [my wife] as a person working along with us to advance” the university, said Hugine, adding that he is leaving with fond memories.

“You feel sometimes as if you have been to a place before,” he said. “And here, I get the settling and calming feeling that seems like I have been through here before. People here are very good, supportive and kind to us. We feel like this is home and that they have accepted us.”

With plans to retire December 31, 2021, Hugine intends on spending more time with his children and becoming a full-time grandparent.

He also has plans to visit all 50 states (he’s already traveled to 46) and intends to travel internationally with his wife.

On the professional side, he aims to volunteer at a non-profit organization.

“It’s been a wonderful experience [at AAMU],” said Hugine. “For this institution, I know that her best days are ahead of her. I see great things happening here at AAMU and I certainly will stay tuned for what I know will be an exciting future for this institution.”