Dr. DeAnna R. Burt-Nanna, who was recently appointed president of Monroe Community College (MCC), has always found education to be “inherit” in her genes.

Her mother held various roles at K-12 schools, including serving as Burt-Nanna’s teaching aid in kindergarten.

“She has always been a gem of an educator, not only to me, but to many,” said Burt-Nanna, adding that her father served as an elected official to the local school board and was a veteran of the United States army.

“I hold this really important place in my heart for community service,” she said. “They were both philanthropists in their own right and servants in the community in highly impactful ways.”

Her passion for education became apparent after completing her first teaching job as an adjunct faculty member at Grand Rapids Community College. 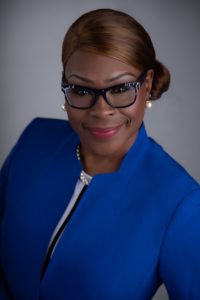 “I knew that I would become an educator at some point,” said Burt-Nanna. “But I always thought that it would come when I retired from my career in industry and that it would be this thing that I did after the fact.”

After serving in several information technology industry roles at Meijer and ESCO Company for almost 10 years, she embarked on a full-time career in higher education at Baker College of Muskegon.

Beginning as the department chair of networking technology, Burt-Nanna went on to serve in various roles at the institution including dean of computer information systems and technology, vice president for academics/chief academic officer and provost as well as vice president of academic affairs.

“Education is a catalyst for changing lives,” she said. “Being able to observe that year after year, hearing about students getting jobs, moving and progressing their careers. It is also a place where once a person is educated, they never are the same and everyone that touches their lives will never be the same. It is the gift that keeps on giving.”

Under her leadership at Baker College, student retention rates increased and the Dr. DeAnna Burt ASPIRE Scholarship Fund was established to support underrepresented and underserved students.

Outside of her administrative roles, Burt-Nanna also served as a faculty member. She described the classroom experience as “rewarding and invigorating.”

“I knew that once I had found myself as a member of the faculty, teaching students, that I would never leave higher education,” she said. “If you believe yourself to be an educator and you get in the classroom and it is something that you feel connects you and is an extension of who you are, you know you are in the right place. And that is the way it was for me.”

Under her leadership, regional accreditation was affirmed. The Achieving the Dream program was implemented, and partnerships were developed with local industries and schools. Additionally, the fall 2018 equity gap between students of color and White students reduced by 3%.

“I will forever be grateful for the commitment of our faculty and staff to come alongside me and the other leaders to move and advance really important work to close achievement gaps, particularly among underrepresented and underserved populations,” said Burt-Nanna.

In December, after two years at SCC, Burt-Nanna was named president of MCC. Her new role is set to begin May 21, 2021.

“With her student-centric focus, her advocacy for diversity, equity and inclusion, as well as her keen business sense from both her academic and industry experience, Dr. Burt-Nanna will bring MCC to new heights,” Dr. Jim Malatras, chancellor of The State University of New York, said in a statement. “I congratulate her and look forward to a long and productive partnership.”

In her new role, Burt-Nanna will focus on closing equity and opportunity gaps at the institution as well as keeping students, faculty, staff and the community safe during the COVID-19 pandemic.

“[MCC] is a vibrant institution, it is a solid institution,” she said. “So how do we define the future of our community college … what is the institution that we want to be for the region and for the state of New York?”

She credited her colleagues and doctoral program at Western Michigan University for recognizing her potential and “planting the seed” to consider a presidency role.

Currently, Burt-Nanna also serves as an Aspen Rising Presidents Fellow. She was a Thomas Lakin Fellow as well as an Association for the Study of Higher Education and Lumina Foundation Dissertation Fellow.