An insurrection at the U.S. Capitol in Washington, D.C., on Wednesday afternoon dominated the national headlines and prompted a forceful rebuke from politicians, law enforcement officials and higher education leaders from coast to coast. 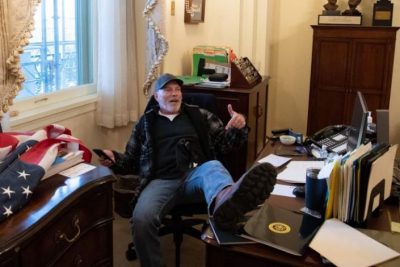 A Trump supporter takes over the office of Speaker of the House Nancy Pelosi.

Several hundred Trump supporters stormed the Capitol, as legislators were going through the process of certifying the Electoral College votes ahead of the Jan. 20 inauguration of President-elect Joe Biden and Vice President-elect Kamala Harris.

“We are deeply horrified and saddened by the assault on the U.S. Capitol, an attack on the very fabric of our democracy,” said Dr. Ted Mitchell, the president of the American Council on Education (ACE). “America is better than this.”

Peter McPherson, president of the Association of Public and Land-grant Universities (APLU), denounced the violence.

“We are horrified, saddened, and angered by the events at the U.S. Capitol Building today. It is hard to fathom how this can happen in our country,” said McPherson. “I join many others in calling on President Trump to accept the legitimacy and finality of the November election and to convey that to the American people. It’s imperative that he stop spreading false information that incited today’s violence and has led many others to deny the true election outcome.”

By the end of the day, Mitchell and McPherson had joined a chorus of other leaders who took to social media to express their dismay over the bedlam that activated the National Guard and sent Congressional leaders into hiding.

College freshman Damian Patterson was assigned by his community college professor to watch the televised proceedings of the certification of the 2020 presidential vote but was startled when he saw Trump supporters breaking windows at the U.S. Capitol and violently pushing past police, in an effort to occupy the halls of Congress.

“Talk about a civics lesson,” said Patterson, who is studying political science. “This really looked like a coup d’état — you know, the kind that we see in foreign countries.”

The excitement that he felt over the election of Reverend Dr. Raphael Warnock and Jon Ossoff to the U.S. Senate in a special runoff election in Georgia quickly turned into sadness over the unrest that forced Washington, D.C. Mayor Muriel Bowser to implement a 6 p.m. curfew.

“If you claim to be a supporter of Western democracy, this has no place in American society,” said Dr. Ravi K. Perry, professor and chair of the Department of Political Science at Howard University. “We’ve never seen this before.”

Scholars from across the nation drew a sharp contrast to how the White protestors who stormed the Capitol were treated as compared to Black Lives Matter protestors who took to the streets this summer to protest the police killings of Breonna Taylor, George Floyd and others. 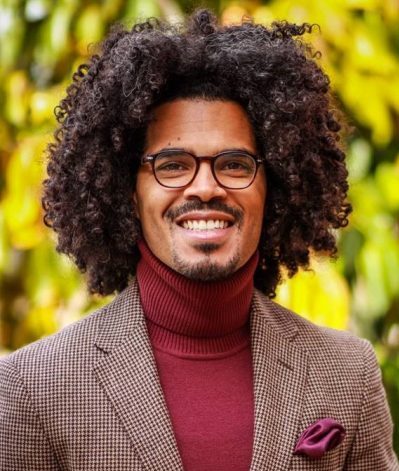 “This is White privilege on full display,” said Perry. “If these were Black people, they would all be dead by now.”

“If this was a group of people of color who had taken to the Capitol and had damaged property and done any of the things that these White folks had done, we would talk about it in very different terms,” he said, adding that the reluctance by some to label those who created mayhem as rioters, points to “how we characterize who gets to take a stand against the federal government in these particular ways or other formal institutions of politics.”

The media, he says, is to blame for this double-standard.

“When we see people that are peacefully protesting based on the injustice of police violence against people of color and Black people specifically and anything happens — usually escalated by police — we don’t get the same language and the same treatment,” Davis said. “Black and Brown people are demonized and villainized and criminalized by their efforts to exercise their constitutional rights. And in cases like this, similar to how we deal with mass shootings, these are exceptions rather than the rule. And I would actually argue that the opposite is true.”

Dr. Peniel E. Joseph, professor of public affairs and the Barbara Jordan Chair in Ethics and Political Values at the University of Texas at Austin, said it is important to place the “White supremist insurrection,” that’s been “aided and abetted by the president” in the proper context. He notes that the historic U.S. Senate victory of Warnock and Ossoff, as well as the organizing efforts of Stacey Abrams and other progressives in Georgia, offers “striking juxtapositions” to what transpired at the U.S. Capitol.

“This is America’s third reconstruction. We’re in the middle of it,” said Peniel, the author of numerous books including The Sword and The Shield: The Revolutionary Lives of Malcolm X and Martin Luther King Jr. “So what you’re seeing are these striking democratic victories and this idea of Black citizenship and dignity always on the ballot and Whites being upset at that and resorting to harassment and threats, physical violence and outright fraud in an effort to destroy Black citizenship and dignity. This is an old story but made new again in the 21st century. This is just another example, a showcase of the cancerous nature of anti-Black racism and White supremacy and the stranglehold it has on our democracy.” 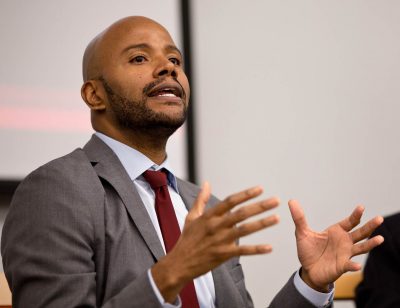 Dr. Kurt Braddock, an assistant professor at the School of Communication and Faculty Fellow with the Polarization and Extremism Research and Innovation Lab at American University chided President Trump for creating a toxic environment by claiming — albeit falsely — that the 2020 presidential election was stolen from him and for using his time in office to stoke racism.

“It’s terrifying and frankly disgusting that researchers and experts have been saying for weeks that the implicit statements made by President Trump and the explicit statements made by President Trump have led to this,” said Braddock. “It’s terrifying. And for those that have allowed it to happen and those who created an atmosphere that allowed this to fester and facilitated it, I think that their response to it now lacks any kind of weight given what they’ve done over the last several weeks.”

Dr. Jason Husser, an associate professor of political science and policy studies and director of the Elon Poll at Elon University, said that the actions of the protestors signal a deep lack of trust in government.

“We’ve seen low amounts of political trust really since the Nixon administration, falling even further post-Katrina, post-Iraq war and then among the Republicans during the Obama administration,” he said. “I see this as more of a symptom of broader decline of civility, people’s willingness to work across the aisle as well as having faith in our political institutions.”

Husser suspects that the imagery from Wednesday’s violent protests will linger for many decades to come.

“In many ways, this may be the most dramatic event for the Trump presidency for a lot of young people in particular,” he said, adding that the nation is deep divided. “Trust is low and it is going to remain low. I don’t know that this event in itself changes that. but it makes real what’s been lurking under the surface for so long.”