Students Feel Anxious About COVID-19. Why Aren’t They Turning to Campus Mental Health Resources For Help?

Students Feel Anxious About COVID-19. Why Aren’t They Turning to Campus Mental Health Resources For Help?

Most college students feel anxious about COVID-19, but less than a quarter of them are using campus mental health resources, according to a recent report by College Pulse, Course Hero and the National Association of Student Personnel Administrators (NASPA). 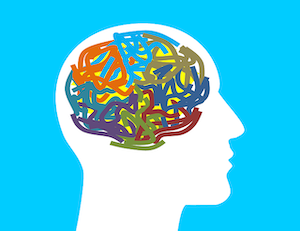 One in five students described themselves as “constantly” anxious about the pandemic, and 56% of students felt at least “somewhat” anxious.

Meanwhile, over half of students – and 70% of “somewhat” or “very” anxious students – reported that they would have benefitted from more emotional support than they received in the past six months, with female students more likely to feel a lack of support than their male counterparts.

Why is there a disparity between the mental health services students want and need and the university supports they’re actually using? What barriers might lie in the way?

It’s partly a “proximity” problem, said Dr. Kevin Kruger, president and CEO of NASPA. As students take their courses either partially or entirely online, more students are farther away from campus-based resources. And prior research shows students use health resources more often if those services are more “central to where they are.” This is “one of the losses traditional-age students are experiencing when they’re not on campus,” he added. “That proximity has probably been one of the biggest drivers of students not using the resources that are on campus.”

Students’ access to university mental health resources also varies based on their home environments, pointed out Amy Gatto, senior campus program manager at Active Minds, a nonprofit focused on student mental health. Students can come up against logistical barriers – like a lack of space and privacy for tele-counseling – but also added stigma.

“In certain communities, there’s still a fair amount of stigma around mental health disorders, mental health diagnoses,” she said. “I think that’s huge for students and young adults just in general, overcoming that stigma. [Now that] we have lots of students back at home with their families, it might not be culturally welcomed for them to go seek professional help, even if it is free on campus.”

Another facet of the problem is students don’t necessarily know what services are available to them. According to the survey, about a third of students weren’t aware of student mental health supports offered by their universities.

Services like tele-counseling are a “pretty new phenomenon,” Kruger said, in part because of the legal complexities of offering licensed therapy across state lines. “Five years ago, if you sampled all the campus counseling centers in the country, maybe 3% to 5% of them were using any kind of virtual counseling. It just wasn’t a modality that campuses were using.”

He encourages universities to emphasize these growing virtual resources – and to teach students how to use them – especially in online orientations for first-year and transfer students.

But part of the solution might also be a more holistic approach to campus mental healthcare that extends beyond counselors. In lieu of using campus mental health resources, the study found that students were turning to peers for psychological support. About 53% reported talking to a friend or family member when they needed emotional help during the pandemic.

While that’s not inherently a bad thing, it means students who need professional help might not be seeking it, Gatto said. At the same time, universities can also make use of that knowledge to reach students. For example, she suggested that institutions continue to focus on offering peer support networks and groups.

She also advised that faculty play a role in the mental health infrastructure of the university, describing instructors as one of the “main touch points” for students during the pandemic.

“If [faculty] can engage with students or recognize when something is off or atypical for that student – maybe their assignments are late or they aren’t engaging as much in classroom discourse – [and] reach out to that student and just check in, sometimes that’s what it takes for our students to know that they’re cared about and that they’re heard and that someone else is thinking about them.”

“Personal contact still goes a long way,” he said. “We need to make sure that students – particularly our most vulnerable students but all students – have some kind of contact with faculty or advisors or coaches or mentors.” The goal is also “connecting students and trying to create communities where we can.”