Cancelling student debt isn’t just an economic issue but a racial justice one too, argued higher education leaders and policy makers in a Thursday virtual panel hosted by the Center for Responsible Lending (CRL) and the NAACP (National Association for the Advancement of Colored People).

The event was moderated by political commentator and former member of the South Carolina House of Representatives Bakari Sellers and concluded with remarks from U.S. Representative Ayanna Pressley of Massachusetts.

Panelists included Dr. Darrick Hamilton, professor of economics and urban policy at The New School; Dr. Fenaba Addo, professor of consumer science at the University of Wisconsin-Madison; Dr. Tom Shapiro, professor of law and social policy at Brandeis University; Hilary Shelton, senior vice president for advocacy and policy at the NAACP; and Ashley Harrington, director of federal advocacy at CRL.

As the U.S. shoulders $1.7 trillion in student debt, students of color are disproportionately burdened, noted the panelists who arrived armed with statistics highlighting the glaring disparity.

According to the Brookings Institute, Black students with bachelor’s degrees owe an average of $7,400 more in student debt than their White counterparts. And, as time passes, that gap widens. Four years after graduation, Black graduates owe almost twice as much as White graduates at $53,000, found Brookings.

Such racial disparities can largely be attributed to generational wealth, explained Addo whose research agenda focuses on how student debt exacerbates racial wealth disparities across generations. 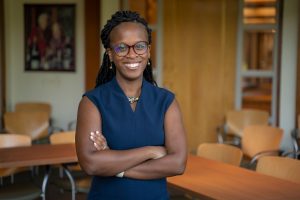 “Black parents were less able to protect their young children from accumulating large debt burdens so there’s connection between racial wealth inequality and student debt burden,” said Addo. “In subsequent work, we found that these growing disparities between Black and White borrowers were contributing to ongoing racial wealth inequality within recent cohorts of young adults.”

However, if the student debt disparity could be closed, with Black students carrying the same amount of debt as their White peers, Addo said that the overall racial wealth gap among young adults could decrease by as much as 10.5%. 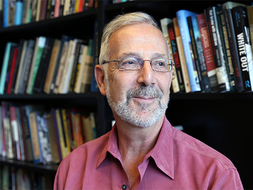 His comment hit home to moderator Sellers, who opened the panel by sharing his own struggle with student debt. Since graduating with $113,000 in debt at the age of 22, he has spent the past 14 years making diligent payments — yet he still owes $100,000, he said.

Moving away from generational wealth, Hamilton added that workplace discrimination also contributes to the student debt disparity, as White graduates have an easier time landing high-paying jobs than do Black graduates. As a result, a discriminatory labor market not only makes paying off student loans more difficult for Black graduates, but it often drives Black graduates to return to school to boost their resumes.

“If you know the labor market is going to be more discriminatory toward you, one strategy might be to make sure that you are highly credentialed when you enter that labor market,” said Hamilton. For that reason, he said “contrary to popular belief, [Black students] are over represented in graduate school, relative to their share in the population.”

In other words, a discriminatory labor market only encourages Black students to take on more debt.

Though panelists agreed on most points across the board, a brief debate ensued on just how much student debt should be canceled. While Hamilton and Addo both advocate for full cancellation of student debt, Shapiro made the popular argument that full cancellation could potentially widen the wealth gap by benefiting high income earners.

“I definitely agree with the moral and ethical issue that the debt never should have been there in the first place, but I also know from modeling that we and others have done that if all debt is canceled, you in fact increase the racial wealth gap,” Shapiro said, adding that his modeling found that cancelling $75,000 was the most equitable amount, cancelling student debt for 80% of Black graduates and 90% of Latinx graduates.

In response, Hamilton  said the discussion of closing the racial wealth gap through student debt cancellation alone was missing the point. 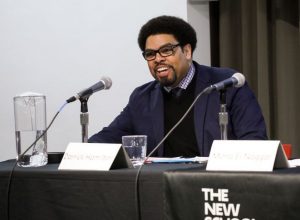 “There’s no silver bullet policy for all our problems,” Hamilton said. “If we really want to address the racial wealth gap, the focus isn’t on student debt but actually providing capital in the first place for Black people to get an asset that will appreciate.

“There’s a problem of an unjust debt burden, but we confuse that with the main accounting part of the racial wealth gap, which is access to credit or wealth in the first place,” added Hamilton, who is an advocate for Sen. Cory Booker’s baby bonds proposal as well as a federal jobs guarantee.

Regardless of how much student debt each panelist felt should be canceled, all  shared the same sentiment that student debt forgiveness was a key component to solving the country’s wealth gap and to providing a much-needed stimulus to the economy, especially amid the COVID-19 pandemic.

“We need to be really clear that student debt is a slice of a much larger context that has to do with family wealth in the first place, inheritance and an education of families,” said Shapiro.

In her remarks, Pressley emphasized bold policy reform as essential to solving the student debt crisis.

“This nearly $1.7 trillion student debt crisis is one that disproportionately impacts Black families, due to systemic racism and generations of what I call ‘policy violence,’ like redlining and employment discrimination,” she said. “Black families have been locked out of wealth building, and the crisis is really a result; it’s not naturally occurring. It’s the result of failed policies.”

“As a result, Black students have had to borrow at higher rates, just for a shot at the same degree as our White peers,” she said. “Not only are we forced to take on more debt, but stagnant wages and discrimination make it harder for us to repay, and so we’re five times more likely than our White peers to default.”

Those defaults can have catastrophic consequences for Black people’s credit profiles, she added, resulting in garnished wages, tax returns, social security and even disability income. The common critique, then, that student debt cancellation is too expensive “is really rooted in an interest of maintaining a fundamentally unjust status quo,” Pressley said, calling it a “false scarcity narrative.”

“The House passed a $750 billion funding bill to bank roll the Pentagon and defense contractors, all while arguing that direct cash payments to put that immediate relief in the pockets in the hands of the American people is not a viable or feasible option in the midst of a pandemic,” she said. “So we can’t buy into this false scarcity narrative, because the money is there.”

Acknowledging the earlier discussion that student debt was just one part of solving a larger problem, Pressley ended by saying that policy reform doesn’t have to be “either, or.”

“I know that today’s conversation is about student debt, but to the points that Hamilton and the panel were raising, this is not a matter of “or,” it is a matter of “and.” And I want it all [policy reforms],” Pressley said. “Now, not all of those can be realized by executive action on day one. But student debt cancellation is one of those with the stroke of a pen that we can do.”

Pressley and other panelists urged President-elect Joe Biden and Vice President-elect Kamala Harris to cancel student debt on day one of their administration. The panelists further voiced their opinions in a planned “Twitterstorm” event a few hours later, during which other student debt cancellation advocates tweeted their arguments, tagging Biden and Harris underneath the hashtag #CancelStudentDebt.

“The student debt crisis hits marginalized communities much harder than others,” read one tweet. “Students of color typically have to borrow more to attend school and earn less after graduating. We need @JoeBiden @KamalaHarris to #CancelStudentDebt now—this is a racial justice issue.”

Jessica Ruf can be reached at jruf@diverseeducation.com.